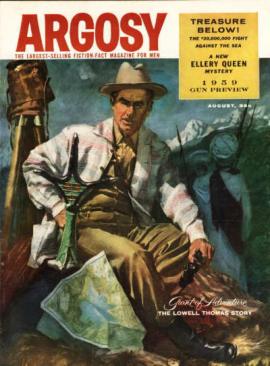 Here is one of the cousin’s best novellas. The super-short stories they had been churning out for This Week really were horrible, but when they awere able to stretch their way into longer pieces, the quality began to shine once more. First appearing in the long-running men’s adventure pulp Argosy (August, 1958), The Case Against Carroll fits into the mold of not-so-innocent man accused of a crime he tries to clear himself of: think of  those Hitchcock films of the day, like North by Northwest (1959) and The Wrong Man (1956).

Carroll needs money to help pay his wife’s medical bills, so he “borrows” some from his firm. Of course one of the partners, Hunt, threatens to expose him unless he pays it back immediately, which, of course is impossible. Said partner Hunt is found dead the next day.

Ellery is enlisted to prove Carroll’s innocence, following one lead after another, to no avail. This story is very similar in basic concept as the immediately previous story, Miracles Do Happen, only this time the characters are more fully fleshed out, Carroll has been sleeping with the partners wife, for instance, and, as it turns out, actually did kill Hunt. And Hunt’s wife.

Unwilling, and perhaps unable, with finding Carroll innocent, Ellery does the next best thing: Carroll goes to the electric chair, but Ellery allows the family to think there was a shadow of a doubt, that a miscarriage of justice had been done, so they could always believe their husband and father was a good man. Kind of like the Rosenberg trial, of the same era, perhaps.

Velie, once again,gets the laugh at the discovery of a corpse:

“Ellery added suddenly, ‘Doesn’t something about her strike you as queer?’

‘Yeah,” Sergeant Velie said. “That posy on her hand ought to be a lily.”