Here is the second last Ellery Queen novel. The first last Ellery Queen novel, Ten Days Wonder, saw the detective deciding to call it quits, to no longer try to play the role of God in people’s lives. That retirement lasted only until the events of The Cat of Many Tails drew him back into the fray, and led to a decade of pretty good books with a new twist of social issues thrown in.

Now comes The Finishing Stroke, a throwback to the hermetically sealed drawing room mysteries of the 1920s and 1930s. The lengthy prologue takes place in 1905, the year of the cousins’ births, and, by extension, of the Ellery Queen character’s birth. The bulk of the book takes place 25 years later, just after Ellery has published his first novel, The Roman Hat Mystery. That triumph leads to his invitation to a fortnight in the country with 11 other up and coming artists and well-established professionals: a composer, a poet, an actress, a designer, a college student, a psychic, a printer, a publisher, a lawyer, a doctor and a minister. Together the make up a dozen potential suspects trapped to together until 12th night. Much is made of the number 12 in this mystery. It remains, however, unsolved for 28 years, when Queen is reminded on his early failure, and remedies the situation. As usual, nobody goes to jail.

This was my first Ellery Queen novel, purchased at Caldor’s in Norwalk, Connecticut, soon after I first saw the 1970s Ellery Queen TV show. I remember picking this novel because of the cover, which featured a skull in a red tissue paper lined gift box, perfect for a 12-year old’s sensibility! I also remember the concepts of the book, the drawing room mystery, the 20 clues, the knowledgeable detective, as being new, fresh and original, but then again, it was the first mystery novel I ever read. 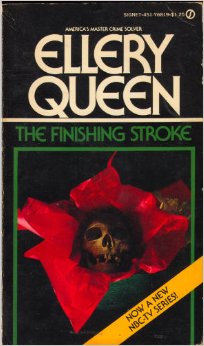 It’s still a good read, even with much older eyes. This time around I was rather skeptical about how long it took Ellery to determine the core of the mystery was a set of twins. It was so obvious (partly because we learn about the twins in the prologue!), and Ellery just dragged out this part of the mystery, until he and we learn that one of the twins died at two weeks old. This throws all suppositions and what is so obvious to both Ellery and the reader out the window in a bit of very well-played writing.

There are holes in the plot, of course, since by this time the cousins had left the meticulous mystery style behind, and were concentrating on good reads with intriguing characters more than making sure everything in the world makes logical sense.

Even so, I remember being more impressed by the clues when I was 12. I think I left the book with the impression that such esoteric knowledge was part of what any well-educated person knows. Really. Now, as a relatively well-educated adult, I think it’s safe to say that the esoterica of The Finishing Stroke has never been a part of my learning process. Everything I know about early Phoenician alphabets I learned from Ellery Queen.