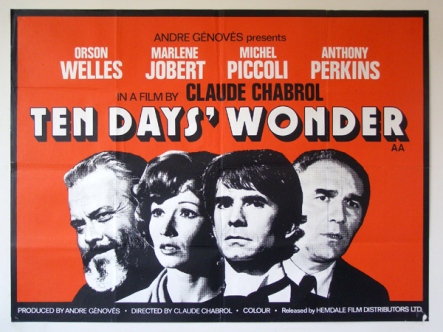 Filmed before, but released after, Don’t Look Behind You, Ten Days Wonder adapted the 1948 novel with an all-star cast, but leaves the viewer absolutely stunned – with boredom.

Not much of the plot is changed, but the movie plods under elongated philosophical discussions. Directed by Claude Chabrel, who also adapted Patricia Highsmith’s The Cry of the Owl for the big screen sixteen years after this, three stars are cast as the legs of the love triangle: Orson Welles, Anthony Perkins and French actress Marlene Jobert. Set not in Wrightsville, but a large French estate, the main d 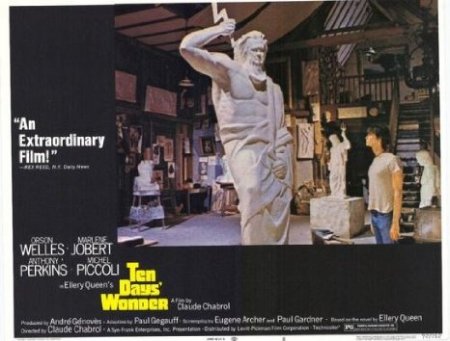 ifference between the book and the movie is the absence of a character named Ellery Queen. He has been replaced by Perkin’s character’s mentor, Paul Regis, a psychologist and professor played by Michel Piccoli. Regis is more mature, thoughtful and mindful than any of the American portrayals, which is one thing this movie has going for it.

Not much else can be said, other than this shows how to take a very good novel and turn it into a plodding film. See for yourself, via this link.