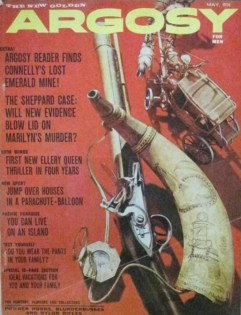 The novelette that opens Queens Full was the last in that anthology to be published. “The Death of Don Juan” was published in the May, 1962 issue of Argosy, and presents Ellery in full form in another Wrightsville murder mystery.

The last scion of one of the Wrightsville founders spends his inherited fortune on non-industrial gambits, the latest of bringing amateur theater to a town that has never shown any interest in such a thing. Money is poured into renovating an old movie theater, and great efforts are put in by volunteers, to no avail. Finally, they hire an aging stage star to play the lead role in The Death of Don Juan. He breaks a wrist, so another aging stage star, even more erratic than the first, in hired on, arrives late, and dies in his dressing room (by a knife in the back, same as in ).

Of course there is a dying clue: just before this expiration date, Ellery asks who stabbed him, and he replies, “The heroine.”

Pullman said in a queer voice, “What did he say?”

Naturally, the actress, local Miss Purity herself, is arrested. Ellery proves her not guilty status, and goes on to show that the last words of the victim were not “the heroine,” but, indeed, were, “the heroin.” Which opens up a whole new can of powder.