Dell published comics from 1929 to 1973, specializing in franchise properties. Their anthology title Crackajack, had previously featured Ellery Queen back in 1940 and 1941. Perhaps their most famous comic was Four Color, whic 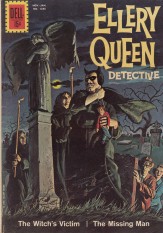 I’ve read these stories so you don’t have to: don’t bother.

However, a few years later, the parody comic The Inferior 5, published by DC, featured a satirical look at Ellery Queen in their seventh issue, excerpts included here with no further comment: