“It was as if he had mislaid something, but could remember neither what it was nor where he had mislaid it.”
The problem here is that this is a great read, yet incredibly dated. A mere two years after the Stonewall Riots, the cousins tried their hand at a mystery which centered on a gay character who kills a man who threatens to expose him. The cousins once again use the mystery novel as a bully pulpit, and explain to the reader the concept of homosexuality. Yes, there was a time when authors felt they  needed to explain homosexuality to their large, popular audience,even 20 years after Frederick Buechner’s novel A Long Day’s Dying (1950), and other critically acclaimed novels by Gore Vidal and Patricia Highsmith, and yet more than 40 years before federally recognized marriage equality.

Also, this novel shows the cousins introducing some sort of continuity to their novels. Instead of each novel being an unconnected island, there are beginnings of bridges between the islands. Face to Face ended at the airport, and The Last Woman in His Life picks up a few minutes later, in the same airport, as Ellery bumps into two old college buddies, one of whom is on his way to his vacation home in, yes, you guessed it, Wrightsville. The reason? His friend had read about the town in Ellery’s books.

“You’re always sorry about this,” Newby snapped, “I’m suggesting to the First Selectman that he haul arse on up to the capital and see if he can’t talk our assemblyman into pushing a bill through the legislature putting Wrightsville off limits to anybody named Queen. Can’t you set foot in this town without causing a homicide? I didn’t know you were visiting, or I’d have put an APB on you! How are you, Ellery?”

This visit proved no different.

Oh, and speaking of earlier books, the friend’s house is “halfway between Wrightsville and Shinn Corners…’ Shin Corners is what Wrightsville became when The Glass Village, a novel about the the red scare and McCarthyism, left Ellery’s universe.

The social cause interest angle of this novel show that the cousins were accepting about certain things, but the details of the novel show that some things, some changes, were not okay. For instanced, the Jezebel Wright statue in the Square (which is round), is “a bronze statue long since turned to verdigris and festooned with so many bird droppings it looked like a modern sculpture.” And: “The Inspector suggested they go into town to see ‘one of those naked movies,’ (Wrightsville had acquired an art cinema)…”  Perhaps the old men were seeing art passing them by…

Also by this time, the cousins are beginning to take stabs at detective story conventions. After the murder, there is a moment of silence and someone asks, as if reading from a script, “Surely, Chief, you can’t believe anyone here had anything to do with Johnny’s death?” To which the Chief replies, “All right, that formality’s out of the way.” Elsewhere the cousins gently much Ellery’s conventions: “Ellery said seriously, ‘I don’t appreciate anyone’s cryptic remarks except my own.’”

Overall, the cousins are returning to the peak of their form, but they are older, and more wry than in 1929. The main themes, though, revolve around homosexuality, even the dying clue. Can you guess what word the victim was trying to say as he died, merely getting out the word “Home?” I knew you could.

The culprit’s apartment is well-stocked with art books focusing on famous gay artists, a library of books of nove 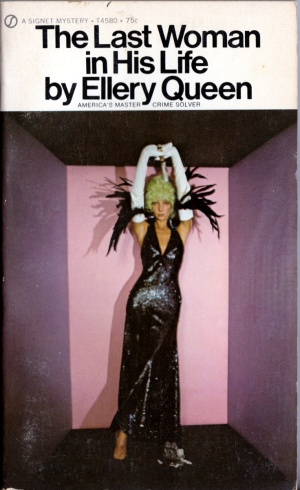 ls and essays by great gay writers and busts of famous gay politicians. The culprit at one point exclaims to Ellery, “You? Had an affair with a girl?” Ellery replies, “It certainly wasn’t with a man. What do you take me for, Al?” “Well, I don’t know.” Such awkward “clues” appear throughout the book.

Ultimately, this is a novel promoting social change, just like so many of their novels since the late 1940s. The cousins tried to use their position as America’s most popular mystery writers to do some good in the world. The general realization by American society that gays and lesbians actually exist and are normal people was just starting to take hold, and small, if naive, gestures like The Last Woman in His Life, where the main character radically announces, “If only people stopped regarding us as some sort of monsters…let us live our lives out as we’re constituted, in decent privacy and without prejudice,” helped spread the message.