This is one of the best of the novels starring Ellery Queen. It is also the second to be plotted by Frederic Danny and written by someone other than Manfred B. Lee.

The Player on the Other Side was written by Theodore Sturgeon, and And on the Eighth Day was written by Avram Davidson (1923-1993). Davidson had started out as a Talmudic scholar, and had only begun publishing short stories a few years earlier. The first novel to bear his own name,  Clash of the Star Kings (1966), would appear two years after this one.

As a religious scholar getting into fiction writing, Davidson was probably the perfect choice for penning this novel, where Ellery is once again face to face with religion. Indeed, the pages are fairly dripping with analogies to most, if not all, of the world’s religions. Its should be remembered that this was the era when comparative religions studies were taking root, partly due to Huston Smith’s (1919 – ) The World’s Religions (1958) and Joseph Campbell’s (1904-1987) The Hero With a Thousand Faces (1948), and his 4 volume The Masks of God (1959-1968). Also, the utopian flavor matches that of Aldous Huxley’s (1894-1963) Island (1962). As such, this novel fits very well into an active intellectual fervor of the day.

And yet,  it fits entirely into the world of other Ellery Queen mysteries. The story takes place in a hermetically sealed room (or, a cut off village), there is a dying clue, a false solution, and the culprit is not turned over to the police. 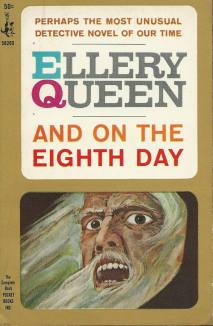