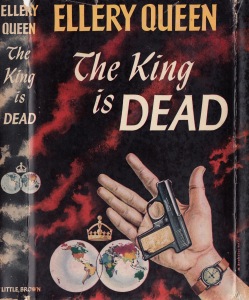 This is an interesting read, along with the other politicized Queen novels which proceeded it. It takes place in New York, on a secluded island, and Wrightsville (surprise, surprise – everyone’s from Wrightsville!) The novel is surely a part of the recent Queen style, yet it is also a throwback to the hermetically-sealed box novels of twenty years earlier. The enclosures get smaller and smaller: the main characters, who have left claustrophobic Wrightsville, end up on their own secret-location island, and the main event takes place in a locked vault. On the other hand, this novel serves as a vehicle for the cousins to discuss the morality of war-profiteering, and life-long aggressive misrepresentation.

This novel was published at the height of the McCarthy Era, and during a period when the cousins churned out mindless short stories for the popular This Week Sunday supplement. It is refreshing that the cousins transcended the politics of the day, and their own economics, to publish this book. Indeed, while the book stands against the militarism of the day, the cousins even have Ellery say, “There’s nothing here that amounts to anything, Mr. Bendigo. Sunday supplement stuff, chiefly.”

Anyway. This novel is certainly not meant for any supplement. Ellery and his father enter a closed society built on arms manufacturing. “Bendigo laughed: ‘No, Queen. We’re very fond of guns here. you may have all the guns you can carry.’ His lips thinned until they almost disappeared. ‘But no cameras,’ he said.”

The military authoritarianism abounds. Indeed, one character compares the island patriarch to the Soviet Union and the Communist Party:

“How could I be a member of the Party when I believe in the dignity of man?”
“You’re against them, Judah?”
“Against them and against you. You’re both cut from the same boy. The same rotten bolt. Any means to the end.”

The main point of the novel seems to be that the United States has grown from something good and wholesome into something else: The American empire was founded on the industries of small towns, like Wrightsville, but has grown into armed and guarded secretive little islands hidden from view. Ellery opines, during his visit to Wrightsville:

It was not merely the re-experience of old times in a place he loved; it was that he had just left a place he detested, called Bendigo Island, with its electrified fences and swarming guards and secret police with blank faces and robotized employees and its soft, curiously rotten air. This ion the other hand, was Wrightsville, U.S.A, where people lived, worked, and died in an atmosphere of independence and decency and a man never had reason to look back over his shoulder. This air, even mill-laden, could be breathed. 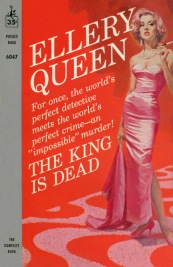 Of course, this is still a mystery novel. The Queens are ostensibly transported to the island to discover the author of threatening letters, but soon realize they are there to witness an unsolvable murder, to be able to clear the guilt of all involved. The actual mystery part, which was central, yet somehow secondary, to the novel is full of holes. This is a genre novel with political aspirations. This is a throwback to the hermetically sealed room cases, but the characters and the world they live in are so intriguing as to make the actual aspects of the genre mere adornments of that room, of that space, created by the novel.

At least one of the cousins was ready to do away with those genre adornments altogether, but that effort was still a year away.