“The prosecutor of Wright County shook hands limply, adding that crime seemed to follow Ellery around like a bill collector and prompting Ellery to mumble that he rather though — at least he hoped — it was the other way around.” 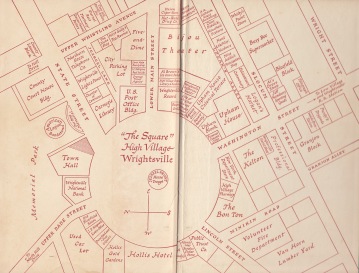 You know you’re in Wrightsville novel when Ellery immediately starts thinking about  Miss Sallie’s infamous Pineapple Marshmallow Nut Mousse.  The mystery which develops is hokey as can be, and it is never really explained as to why the murderer left weird clues (except for a quick attempt at blaming PTSD), but the characters are in Wrightsville, and the cousins seemed to enjoy writing about that small town. The book also rests easily with the previous effort, Cat of Many Tails, in that both have upped the number of corpses left along the way. The body count here mounts to something like seven.  In the end, the tale is as delicious, and as nutritious as that Pineapple Marshmallow Nut Mousse.

The real point of the story, though, isn’t the criminal activity. More, it’s the story of one of the victims, an alcoholic ex-school-teacher living deep in the woods of Wrightsville, and the daughter he has been raising in that wild environment. An early example, if you will, of homeschooling.

The daughter is named Rima Anderson, after the jungle girl of William Henry Hudson’s Green Mansions: A Romance of the Tropical Forest (1904). She has spent the last dozen or so years in the woods with her father, learning literature and the ways of the forest from him. She has adapted fairly well to her fairy tale life. “At times, [her father] killed rabbits and other small game in the woods north of The Marshes. Rima never touched them. ‘They’re my friends,’ she laughed. ‘I couldn’t eat my friends.’”

Her lifestyle is further explained:

“Rima spent her days in the hills and backwoods surrounding Wrightsville. There were sweet wild berries to be plucked, streams to bathe in, injured birds and animals to nurse, hot long-grassed meadows to lie on while her father sat cross-legged by her side lecturing and questioning, book in hand.”

To quote Raising Arizona, “It ain’t Ozzie and Harriet.”

So, now Rima has been removed from that world, and needs a job to support herself, to spend all day under a roof. Some culture shock inevitably occurs. For instance, Rima and Ellery picnic at a swimming hole, and Rima jumps in without clothes. Ellery tries to ex[plain why that sort of thing is inappropriate:

h! The rules of society, morality, good manners, er…any number of things.” Ellery said desperately, “Didn’t your father ever teach you anything but English literature?”
“He taught me everything.”
“Well, he appears to have left one or two things out—“
“You mean about sex?”
“Look there, Rima! In another two weeks the countryside will be simply beautiful-“

Turns out, Rima may have been more informed and centered about things than the society she was entering. But she also is aware of that. In her hand-written invitation to the picnic, Rima had written, “Bring a pair of swimming trunks if you feel especially stuffy this morning.” 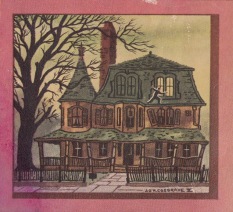 Speaking of stuffy, there is also is a description of a bar scene: “Gus’s was crowded with people decently having a beer or a shot or two before going home from the mill to the office. Everybody seemed to be enjoying himself except one man alone join a booth, who was plainly suffering.”

Like Cat of Many Tails, Double, Double is an exploration of various segments of society. The victims are “Richman, poor man, beggar man, thief, doctor, lawyer, merchant, chief.” a wide swath of society, and all are treated as individuals worthy of respect. Puritanical judgements are not viewed with sympathy, hence Rima’s “wild” ways, and the description of a saloon as a normal, happy, place. These books were written, of course, during the beginning years of the Red Scare, and are,I believe, a veiled response to the rampant fears and suspicions of anyone who did fit a specific mold. If memory serves, this would get even less veiled in the upcoming novels.