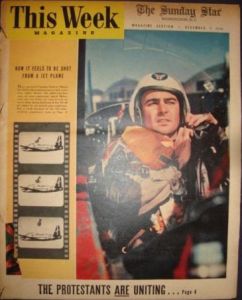 In the December 4, 1949 issue of This Week appeared a very short story by Ellery Queen. Extremely short, just over 1,500 words (but who’s counting?) This was to be the first of a long series of very short stories written for This Week, a weekly Sunday newspaper insert with a circulation of about 14.5 million. Short, but, I hope, lucrative. Money is the only explanation for this drek.

Reprinted as “The Lonely Bride” in Q.E.D. Queen’s Experiments in Detection (1968), the story relates the travails of a young woman who marries a man she barely knows, only to awaken the day after the marriage to find 1) him missing, 2) he is a gambler deep in debt, 3) thugs are coming after her, 4) he has hidden the money is their flat, in a book, and 5) there are no books in their apartment.

Ellery solves the case in less than six pages.