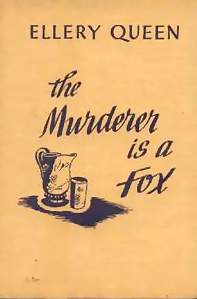 So, here was “The Greatest Generation” finishing up World War II, welcomed home to great applause, and Ellery Queen writes a novel about that which includes, front and center, the issue of post-traumatic stress disorder.

This is the second novel to take place in the idyllic upstate New York town of Wrightsville. Ellery has been invited back to investigate a twelve year old crime. Davy Fox is a returning war hero who has issues. His wife is convinced that although his war experiences may have had something to do with his withdrawals and his mood swings, his problems really date back to when he was a young lad, the son of a man, Bayard Fox, sent away to prison for murdering his wife, the hero’s mother. Dear old dad has always maintained his innocence. Hero’s wife, Linda, figures if the Davy can come to grips with his childhood tragedy, if Ellery can find the real culprit, then the hero can re-enter society, overcoming any psychological problems caused by the war. So Freudian, so excusing of the horrors of war: with thousands of men returning, some scarred more than others, any problems surely had to pre-date the war, right?

This is pretty strong stuff, much stronger than anything the cousins had recently written, certainly stronger than their murders-in-eccentric-wealthy-family style. The characters and situations are, well, more flesh than cardboard. Take, for instance, this wartime memory: “Such as being holed up in the gray rocks over Bink’s gray face, listening to him cough his life up and wondering which of them would be luckier when the little Sons of Heaven closed in…Yes, there were a lot of thrills, friend.”

Later, Fox tells Linda, “Binks was scared to death of what the War had made him learn about himself. I guess we all are – […] Binks was sore at me for saving him. We were in beds next to each other after they flew us in from Kunming to the hospital in Karachi. he reared up in bed, Linny, just before he died, and he called me…names. He was right! A man’s got a right to die when he’s all chewed up and no use any more and he’s scared of coming back -“

Fox refers to himself as “the killer they gave medals to.” The son of a killer. The guy who finds hi

mself in the middle of the night fighting impulses to strangle his own wife.

So, they get Ellery to investigate the old murder. Ellery is reluctantly game, explaining, “I must tell you, before we go on, that I don’t ordinarily waste my time and sympathy on husbands who try to strangle their wives.” He returns to Wrightsville, springs Bayard Fox out of jail, and returns to the scene of the crime.

While there, many of the characters of Calamity Town appear, and new ones are introduced. We also learn about more food that Ellery disdains: “Ellery found himself facing the two excited spinsters across a table ghastly with the half-nibbled corpses of creamed chicken patties, Waldorf salad with ersatz whipped cream and maraschino cherry, and Miss Sally’s famous dessert specialty, Pineapple Marshmallow Nut Mousse.” Ghastly half-nibbled corpses!

Despite the idyllic nature of Wrightsville, Ellery, and other characters, view it from a distance, seeing it as a cultural backwater. “A palimpsest, by thunder! I never thought I’d find that in Wrightsville!” he says at one point. At another, listening to someone babble on and on: “Stand pat, old boy, he said to himself. Some sense will creep out of this heap of words yet.”

Eventually, the lost witness shows up, who was caught up in the events of Europe during the ever-present war. “I came recently to my home in Canada, Captain Fox, fresh from a German concentration camp. They do not like the arts, those Germans, except for paintings of fat women…I was one of the fortunate ones. I escaped….”

So, anyway, Ellery solves the case, to almost everyone’s satisfaction. Bayard doesn’t buy it, though, and so, after making the official explanation that the mother was unknowingly responsible for her own death, the truth is revealed. It’s not that Davy is the son of a killer, he is, indeed, a killer. But that information is to be kept silent, out of sight, like so many other things are swept under the rug, ignored, denied, after war’s end.