Three years after their most most recent published novel, Frederic Dannay and Manfred B. Lee published Calamity Town, a novel unlike the others the had written over the last dozen years. The absence of any urban environment was an immediately obvious change. Also, Ellery Queen was visiting a new-to-him small town, where no murder had occurred in at least twenty years. The novel is a series of observations about divisions and unities in the town, focusing on a very wide cast of characters. Ellery is the only regular character from previous novels to appear, although he does think about his father toward the end of the story.

The descriptions of the town, people and decor are sometimes witty. For instance, one sections describes a living room:

“Mr. Queen took inventory. Lived in. There were a few aged mahogany pieces of distinction, and a beautiful fireplace of Italian marble. And at least two of the oil paintings had merit.

J.C. noticed his interest. ‘Hermione picked out all the pictures herself. Knows a lot about art, Hermy does…’”

Of course, there are secrets, and secrets can lead to whisperings of bad intentions, and then someone does end up poisoned, and the town goes, well, apeshit. Not only do accusations fly, and social connections become severed, but

characters accused of murder are physically attacked. “Ellery found himself, absurdly, fighting for his life with a group of blood-maddened savages who were dressed like ordinary people.” Once the problem goes away, the town returns to its staid community status.

It takes a while, though, for the murder to happen, a fact which actually confounds Ellery at one point: “Yes, it was taking shape. He’d been lucky. The makings were here, rich and bloody. But the crime. Where was it?”

Ellery, living in Wrightsville under an assumed name, does not play the role of public snoop, or private detective. The usual style of murder mystery plot, that is, murder is committed, detective comes in, interviews people and solves the mystery, does not play out here. Instead, here, the writer arrives in town, befriends influential family and prominent town figures, hears gossip, suspects a murder may occur, watches, helplessly, as the murder occurs, and watches as everyone most directly involved dies. He leaves town, but then comes back to tell just two people who the murderer was, and why. With Calamity Town, the cousins threw away many conventions of their craft, and came up with one of their best novels.

They even threw away the heartless Ellery, who reflects at one point, “Stupid, thought Ellery. A stupid speech. But then he was usually the observer, not a participant. How did one go about drawing th

e agony out of a stab to the heart? Killing without hurting – for as much as a second? It was a branch of the art of violence with which Mr. Queen was unacquainted…” Such introspection would have seemed absurd in any earlier Queen novels.

Although the book is, technically, still a whodunnit, the novel plays out like a modern Greek tragedy. The constricting social mores of the small town define the actions of the characters, and they can not, indeed, do not even try, to change the story that has been scripted for them. They play out their horrible story, never communicating with each other, just march on to their, well, dooms.

The book is placed during a specific time in history: between August 5, 1940 and May 11, 1941. New WPA style buildings are mentioned, as is the booming economy in the woolens factory, making uniforms. The draft and buildup to the war are also mentioned. All of this begs the question: what would the meaning of this novel be to a reader in 1942? Would there 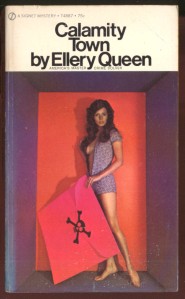 be a subtext about America’s march to war? Probably, but hard to tell with any accuracy.

The first edition of the book proudly exclaims, “NOT SERIALIZED BEFORE BOOK PUBLICATION.” Well, not for lack of trying. The story goes that the cousins tried the usual magazines to pre-publish a condensed version of the book, but, although editors claimed it was their best book yet, they gave no reason for publishing the thing. Some secrets, apparently, are never spoken. Trying to figure out secret meanings 75 years later just gets impossible. Luckily, Calamity Town says enough to remain a great read.