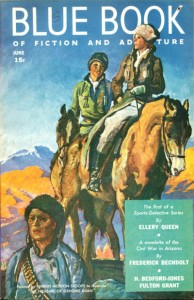 A simple piece of fluff interesting for the continuation of Ellery and Paula’s relationship, and for Ellery’s cross-over into the sports fiction genre, which was so popular during the 1930s, that there were several monthly magazines dedicated to it. Not only was this a murder mystery, but a Hollywood story, a sports story, with a tinge of romance thrown in.

The cousins published four sports-related short stories in Blue Book magazine during the second half of 1939.  Written at the same time they were scripting their weekly radio show, the quality of the stories is spotty.  Interestingly, the “female interest” in the stories is gossip columnist Paula Paris, while at the same time, the “female interest” was Ellery’s new secretary, Nikki Porter.

The story starts in Hollywood, with Ellery bemoaning the fact that two news York teams are in the World Series, (which would have made this story take place in 1937), and he’s 3,000 miles away. Paula suggests they fly to New York to catch a game, which they then proceed to do. Of course, a man is murdered near them, which leads to this highlight of the tale:

“Big Bill’s just kicked the bucket. What happened in the second inning?”

Mr. Queen rose involuntarily. Then he sat down again. “Damn it,” he roared, “it isn’t fair. I won’t go!”

After traveling three thousand miles, he still gets pulled into a mystery. Not much of a mystery, but a mystery none-the-less.