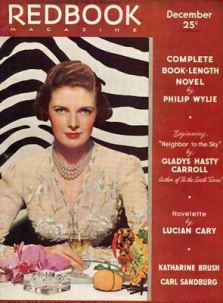 It can be hard to imagine the world of the early twentieth century, when great numbers of people were unaware of other cultures and people, and saw those cultures and peoples as “exotic.”  This, of course, applied to many ethnic and national groups, including Japanese-Americans. Without realizing that perceptions were limited in 1936, “The Hollow Dragon” makes absolutely no sense.

Jito Kagiwi lives in an American home of “boldly Oriental character,” which means it is decorated with colorful rugs and dragons and such.

The story is not great. The plot is not too interesting, and neither are the characters, or even the mystery. Perhaps the cousins were finding that simple stories, without any need four complex thought, were the ones that popular magazines would pay top dollar for. Maybe Hollywood was beginning to take it’s toll on Ellery Queen. In the same month that “The Hollow Dragon” appeared in Redbook, and a condensed version of their novel “The Door Between” appeared in Cosmopolitan.  The second Ellery Queen movie, “The Mandarin Mystery,” based on “The Chinese Orange Mystery,” premiered on December 23rd, 1936.