The story of Ellery Queen has been repeated quite often, and can be found on several websites.  Also, there is a new biography of the cousins by Francis M. Nevins, Ellery Queen: The Art of Detection (Perfect Crime, 2013).  The basic story is that two cousins in their early twenties created the pseudonym of Ellery Queen, and wrote a novel about the adventures of Ellery Queen.  They won a mystery-novel writing contest sponsored by Colliers and the Frederick Stokes Company.  Colliers was bought by another company, which gave the award to another novel (written by Isabel Briggs Myers, who published two mysteries, and later found fame, with her mother, as the originator of the Myers-Briggs Type Indicator personality inventory), but Stokes still wanted to publish the Ellery Queen novel.  The cousins were paid $200 (as opposed to the $7,500 award presented to Isabel Briggs Myers).  Ellery Queen’s first book, The Roman Hat Mystery: A Problem in Deduction, was published by the Frederick A. Stokes Company in August, 1929.

An interesting side note is that prominent thanks were given to Professor Alexander Goettler (1883-1968), chief toxicologist of the City of New York, appropriate since the victim was poisoned.  Goettler himself is an interesting historical figure, and is one of the subjects of Deborah Blum’s The Poisoner’s Handbook: Murder and the Birth of Forensic Medicine in Jazz Age New York (2010).  Goettler was still making headlines in 1929.  For instance, in July he shocked many by declaring that a famous aviator, Wilmer Stults, was drunk when he crashed his airplane.

Starting points intrigue.  Goettler (later spelled Gettler), the first professional toxicologist detective, prototyped nearly every fictional detective in his wake.  Certainly there have been other toxicologists hired by New York (and other cities), but special attention is paid to Goettler because he was first, and that novelty has survived.

The Roman Hat Mystery was Ellery Queen’s first novel.  This is significant, and people are drawn to it for that very reason, but it is far from being his best novel.  Not even close.  The cousins even distanced themselves from it later in life, describing the early Ellery as entirely unlikable. However, the cousins were still better than most writers, and they do sweep the readers up into the action.

In its time, it must have seemed timely, and even fresh, as it touched upon such topics as Prohibition (or, more precisely, the harmful effects of wood alcohol, and the prevalence of home-distilleries.), and race relations (more specifically, interracial relationships, and the social consequences of light-skinned African-Americans “passing” as white.

These issues, however, along with the lack of Miranda Rights, dates this book.  It is best read as a historic text: Dannay and Lee’s first novel, a murderer trapped in a incomprehensibly racist world, in the days of prohibition and evening clothes, when top hats and derbies were normal evening wear.

Interestingly enough, the changing notes of popular entertainment also come up in The Roman Hat Mystery.   The first paragraphs of the novel address this: “…the ‘low-brows’ … had deserted the legitimate theatre for the more ingenious delights of the motion picture palaces.”  This, of course, at the time the “Little Theatre” movement was expanding across the country.   The one theater with a packed house was the Roman, featuring the play “Gunplay,” “the first drama of the season to utilize the noises customarily associated with the underworld.  Automatic machine guns, raids on night-clubs, the lethal sounds of gang vendettas – the entire stock-in-trade of the romanticized crime society was jammed into three swift acts.”

The competitive theater world grew more garish.  The competitive mystery novel world, with the breaking of the fourth wall through the “Challenge to the Reader,” became a little less so.  Despite the various masks or layers set up to lend an air of reality to the novel, it remains clear that The Roman Hat Mystery is a puzzle for the reader to actively attempt to solve.  Details of the actual motive are not given before the Challenge, but enough clues are put in place so the reader can see that, at least, the author had them, and their intellect, in mind while writing the book.

This tended to raise the Queen books above the mysteries published in the pulp magazines: The plot came before the writing.  Today, we are used to novels and television shows which have larger plots revealed from novel to novel or from season to season, all foreshadowed from the start.  There is an internal consistency between episodes.  For popular fiction of 1929, this long-term planning was unheard of, so while the individual novels may have ben well plotted, the cousins had no idea where the adventures of Ellery Queen would lead them.  Indeed, mny parts of the formula would be quickly ejected once it became obvious that they had outlived their usefulness.  The first novels include the backstory that the mysteries took place before 1929, by which time Ellery was married and retired to an Italian villa.  We know this because the mysteries are introduced by one J.J.McC. Once the series proves to be long-lived, JJ and the Italian villa disappear from the continuum.

In a way, this makes the novels, in the long run, accessible.  They may not be easy to find, so you can read them as you find them, without fear of jumping into the middle of a larger tale.  There really is no reason to read them in the order in which they were published, even though, apparently, that is exactly what I am doing. 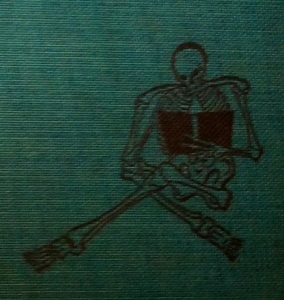